In this post you will find the origins of the Portuguese Pavement and a brief approach of the first exemplars that appeared in the city of the Seven Hills.

This art constitutes one of the most relevant representations of the Portuguese culture. Today, simultaneously with the emblematic tiles, the magnificent decorative motifs of this artistic and functional element of the urban architecture, are present not only in Portugal, but spread all over the world.

Whereas the use of the tiles has several centuries of tradition, the pavement as we know it today, emerged much more recently, being for that reason a huge and sudden case of success.

We suggest you read the article Portuguese Tilework: A Unique Form of Art in the World.

A Glimpse over the History of the Pavement of Lisbon

The practice of paving the roads is old. The roads cobbled with stone that facilitated the circulation and communication between remote points of the vast Roman Empire are famous and still existing. Also Roman are the mosaics constituted by tesseras, small colourful elements of stone, glass and terracotta, that deftly organised would constitute magnificent decorative coatings.

Lisbon was, as we know, an important city of the extensive Roman Empire and, therefore, had its main streets paved with stones or regional clay.

In the 15th century, the period of economic expansion of the reign of King João II had consequences in the urban development of the cities of Lisbon and Porto. The so-called Ruas Novas (New Streets), where the most important commercial warehouses took place, were then opened and paved.

The following monarch, King Manuel finished this process that turned the Rua Nova de Lisboa into one of the most famous and appreciated streets of the world in the 16th century.

Later on, the prosperous reign of King João V (1689-1750) was also prodigal in the carrying out of public works. In this period dates the enlargement and cobbling of countless main streets and peripheral roads that aimed for, in addition to the facilitation of the circulation of traffic, the embellishment of the city.

However, the dreadful earthquake that destroyed the city in 1755 didn’t allow us to become testimonies of these and other grandiose works.

The reconstruction of the city, although well planned, took many years to be finished and, therefore, the decorative pavement with the characteristics that we know today is very recent and dates back only to the mid-19th century.

In History of Lisbon: A Glimpse Through Thousands of Years you can get an idea of the historic path of the city.

About the reign of King Manuel it is still today told a curious episode about a rhinoceros offered by the Sultan Muzafar, of the kingdom of Cambay (now Gujarat) and of the city of Diu, to Afonso de Abuquerque, vice-king of the Portuguese India. This mighty and unknown animal was brought to Lisbon and here caused a big impact.
The paving of the streets of the city in this period is associated with the passage of a parade on the occasion of the king’s birthday. There, one of the attractions would be the rhino, and to avoid it from ruining the feast with mud, the king would have ordered the cobbling of the most notable streets.
In truth, when the rhino arrived to Lisbon the main streets had already been paved a few years before, but throughout the times the collective memory ended up associating the two events, which shows well the importance and the impact of both at the time.

Let us then get to know better the origins of the Portuguese Pavement.

The Origins of the Portuguese Pavement and a General

We’ve already referred that the Portuguese Pavement was born in Lisbon. For that reason, let’s situate ourselves in this city in the year of 1842.

At that time the S. Jorge Castle housed the Barrack of the Hunter Battalion no. 5, commanded by the Tenant-General Eusébio Cândido Pinheiro Furtado, an engineer that appreciated and knew the roman construction techniques.

Under his orientation the parade ground of the barrack was cobbled, taking advantage of the labour of the prisoners of the Limoeiro Prison that were nicknamed “legcuffs”.

Using stones of white limestone and black basalt of the region of Lisbon, was created the first decorative carpet that displayed a vibrant zigzag.

This impressive work that thrilled the population of the city is documented in photos but nothing is left of it. The deep interventions of restoration, carried out in the 1940’s in the S. Jorge Castle destroyed this valuable testimony of the origins of the Portuguese Pavement. There were no vestiges of the barracks or of previous occupations left, which according to the vision of the time, were completely irrelevant and were not worth preserving.

However, the impact of this first decorative pavement had immediate repercussion in the Lisbon of the 19th century. And 6 years later, in 1848 the most important square of the city, Rossio, was cobbled under the orientation and according to the project of the same military engineer. In 323 days, an area of 8712m2 was covered with black and white limestone.

Mar Largo, an Impressive Drawing of the Portuguese Pavement

The drawing simulated an enormous carpet constituted by a centre and a border. The centre, which exhibited an alternated sequence of black and white waves, was called Mar Largo (Wide Sea) in homage to the Portuguese Discoveries.

This is one of the most well-known decorative motifs of the Portuguese Pavement, having been reproduced in the famous Calçadão in Copacabana in the city of Rio de Janeiro, right in the beginning of the 20th century.

Rossio suffered several transformations throughout the time and around 1925 the waves were reduced to a small area around the King Pedro IV statue.

It stayed this way during the entire 20th century until 2003 when the grand carpet was replaced. We should however be sad about the disappearance of the border that had more classic decorative motifs and that served as a finishing touch to the whole.

Surprisingly modern for the time it was created, this drawing is still timeless today. The pattern of the waves creates several optical illusions that vary according to the viewpoint of the observer.

Now creating concave and convex sensations, sometimes meandering in an infinite alternation of black and white, these effects give the Square a dizzying dynamic.

The First Exemplars of the Portuguese Pavement in Lisbon

After this grand work, quickly new pavement projects were carried out in other places of the city. Between 1848 and 1910 the more noble zones were cobbled with magnificent decorative motifs. These are the cases of Cais do Sodré, Largo do Carmo, Camões Square, Príncipe Real, Município Square, Chiado, Praça do Comércio and Avenida da Liberdade.

However, we must keep in mind that many of the original patterns have been replaced over time by others, or given rise to other aesthetic options. It is relevant to observe some of these cases:

Contrary to these mentioned cases, there are a few of the first exemplars of the Portuguese Pavement that can still be observed today. We have to undoubtedly highlight one of the most beautiful and emblematic sequences of carpets in Lisbon in the Avenida da Liberdade. This sequence resulted from a truly urban revolution initiated in 1879, with the need of expanding the city.

Its first section was built in the late 80’s and covers the space between the Restauradores Square and the Rua das Pretas that coincides with the former fenced garden, the Public Promenade. It displays a classic drawing with rectilinear frames.

The second phase of the construction of the Avenida da Liberdade until the Marquês de Pombal Square dates back to the first 8 years of the 20th century. Here the plant-inspired motifs present an Art Nouveau aesthetic, following the evolution of the taste of the time.

Despite this difference in style, the proportions are kept the same, and thus the harmony and unity of the space remain throughout the Avenue. The repletion of the patterns in the same rhythm marks and facilitates the walking of those who appreciate and are dazzled by this amazing art.

After sharing the origins of the Portuguese Pavement, getLisbon will develop in future articles other equally interesting aspects. This original art constitutes a very rich subject that never fails to surprise us.

Also read: Curious Secrets in the Portuguese Pavement in Lisbon 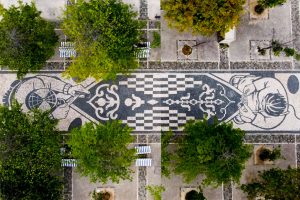 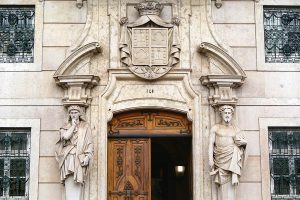